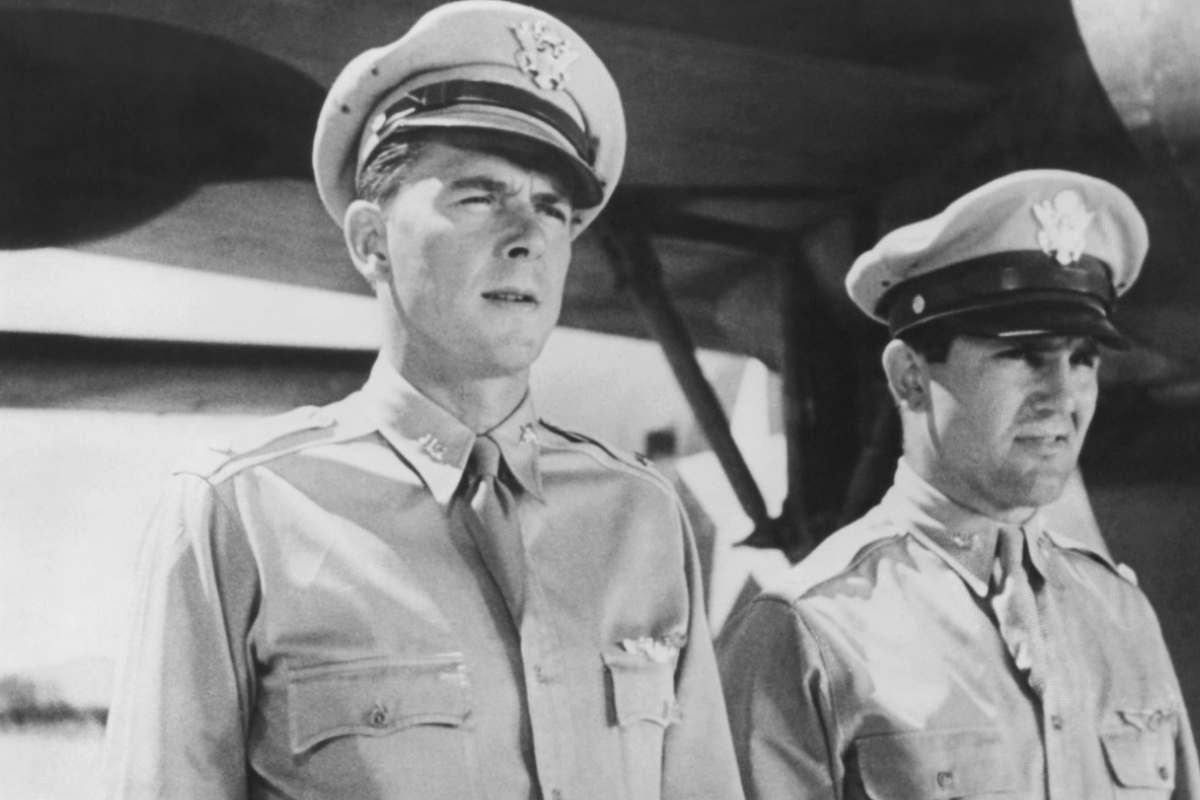 Ronald Wilson “Dutch” Reagan served two terms as governor of California and two terms as president of the United States. Before that he was an actor, appearing in movies, radio and television. Reagan made his motion picture debut in Love Is on the Air (1937) in the role of radio crime reporter Andy McCaine.

Here are ten Ronald Reagan movies that provide an interesting look at his motion picture career. Watch one for the Gipper?

Ronald Reagan plays Yank, an American soldier recuperating at a British hospital in Burma just after the end of World War II. One of his fellow patients is a tough, abrasive Scottish corporal named Lachlan “Lachie” MacLachlan (Richard Todd), whose medical condition is terminal. Unbeknownst to MacLachlan, both of his kidneys are irreparably damaged and will shut down in a matter of weeks. Yank, along with the other patients in the ward and nurse Sister Margaret Parker (Patricia Neal), try to make Lachie’s final days as comfortable as possible. Richard Todd was nominated for a Best Actor Oscar, with Reagan delivering a fine performance as the wounded American from the heartland.

Director: Vincent Sherman
Great Reagan line (directed at Richard Todd, who is playing his bagpipes): “Somebody give him asthma.”
On DVD: Ronald Reagan – The Signature Collection (Warner, 2006)

Ronald Reagan plays Burt Rainey, a crusading district attorney out to bring the murderous members of the Ku Klux Klan to justice in a small southern town. Ginger Rogers (minus dancing partner Fred Astaire) plays Marsha Mitchell, a visiting model who witnesses a murder by her brother-in-law (Steve Cochran) and his fellow Klansmen. Doris Day, Hugh Sanders, Lloyd Gough and others offer excellent support. Although Reagan was never known as a civil rights firebrand during his political days, his character comes out smoking against the evil white hoods in this largely-forgotten picture from the Red Scare era.

Director: Stuart Heisler
Great Reagan line: “Hear that yellin’ out there? That’s the Klan! They just found out that law and order can’t touch them. You did that when you let them off! They’re runnin’ wild! They’re gonna rip up the old laws and make new ones! They’re gonna do every rotten thing they can think of doing!”
On DVD: Ronald Reagan – The Signature Collection (Warner, 2006)

Ronald Reagan plays Grover Cleveland Alexander, the Hall of Fame pitcher who battles back from epilepsy and alcoholism to become a star in the major leagues. Doris Day plays wife Aimee Alexander, with Frank Lovejoy as ballplayer Rogers Hornsby and Hugh Sanders as big league manager Joe McCarthy. Like most sports biopics of the era, The Winning Team represents a highly fictionalized version of Alexander’s life. Nonetheless, it’s a fine role for sports fan Reagan, who in 1936 began broadcasting (or recreating) Chicago Cubs games for WHO in Des Moines via telegraph wire reports.

Director: Lewis Seiler
Great Reagan line (to Doris Day as wife Aimee): “I’ve been stealing strength from you all season – every game, every pitch. Without you there, I couldn’t have done any of it. God must think a lot of me. He’s given me you.”
On DVD: Ronald Reagan – The Signature Collection (Warner, 2006)

Ronald Reagan plays Deputy Marshal Frame Johnson, an Old West lawman whose specialty is ridding towns of outlaws and other riffraff. In between his battles with the Durango Kid (Wally Cassell) and Kurt Durling (Preston Foster), ol’ Frame manages to romance sassy fiancée Jeannie (Dorothy Malone). Alex Nicol, Ruth Hampton, Jack Kelly and Dennis Weaver appear in support. In his California gubernatorial campaigns, Reagan always championed the law and order theme, which just happened to be the title one of his best western films.

Director: Nathan Juran
Great Reagan line (to Wally Cassell’s Durango Kid): “At least you got the satisfaction of knowin’ you’ll get hung legal.”
On DVD: Law and Order (Universal, 2003)

Director: H. Bruce Humberston
Great Reagan line: “I don’t know what there is about the pelts of dead little animals that makes ‘em so attractive to women, when one little mouse scares ‘em silly.”
On DVD: Not commercially available

Director: Nathan W. Juran
Great Reagan line (after sinking a Japanese ship): “Got him!”
On DVD: Hellcats of the Navy (Sony, 2003)

Ronald Reagan, Nancy Davis and Arthur Franz in Hellcats of the Navy (1957)

Ronald Reagan plays Jack Browning, a West Coast crime boss who engineers an armored car heist in California. Lee Marvin and Clu Gulager play a pair of vicious Blues Brothers-type hitmen, with John Cassavetes as a race car driver and leggy Angie Dickinson as femme fatale Sheila Farr. Reagan gets to exhibit his hipper side in this wild crime noir, calling Dickinson “Babe” in several scenes. This was Reagan’s final feature film, but not his last appearance in Hollywood as he continued to act on TV’s Death Valley Days from 1964-65.

Director: Donald Siegel
Great Reagan line: “I approve of larceny. Homicide is against my principles.”
On DVD: The Killers – Criterion Collection (Criterion, 2003)

Ronald Reagan plays Peter Boyd, a college professor who adopts chimpanzee Bonzo and tries to prove that environment plays a larger role than heredity in a child’s development. Diana Lynn acts as Bonzo’s “mother,” with Walter Slezak, Lucille Barkley and Jesse White also on hand. Bedtime for Bonzo is a harebrained comedy, with Reagan good-naturedly appearing as second banana to the entertaining Bonzo, who winningly plays himself. References to Bonzo occasionally came up in the future prez’s campaigns, wielded like a club by his opponents but often humorously deflected by Reagan and his mighty Teflon-like political armor.

Director: Frederick De Cordova
Great Reagan line (to Diana Lynn): “You’re no dope, Jane. You couldn’t be. You haven’t a university degree and you don’t teach logic.”
On DVD: Bedtime for Bonzo (Universal, 2005)